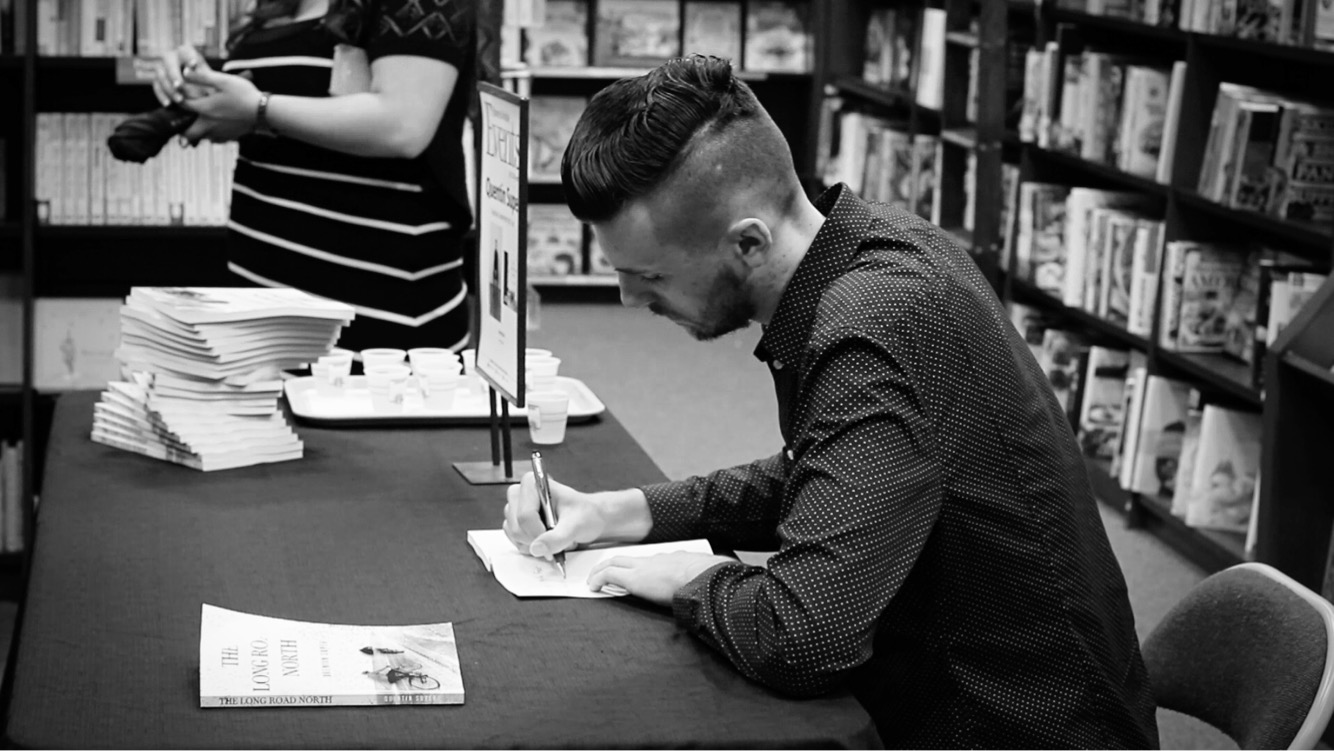 It started with an email from the publishing company.

“I would like to congratulate you on having your book selected for publication by our review board. You deserve to feel extremely proud of this accomplishment; especially in light of the fact that we receive almost 8,000 manuscript submissions each month and only a small percentage are given the opportunity to move forward,” the email read.

Holy shit, I thought to myself as I was sitting in the parking lot of a liquor store at the time, ready to go inside and drown my sorrows in a bottle of Grey Goose.

A few weeks later, I was stuffing a contract into an envelope that looked like it was on steroids. I had to put a few pieces of tape on the back just so the contents didn’t fall out.

I probably should have waited until the morning, when the post office opened and then I could walk inside and buy a larger shipping package, but I was too impatient and lazy to do that.

That night, I dropped the hefty envelope into a blue mailbox and then drove back home in sub-zero temperatures. I didn’t know what was going to happen next.

The next few months were spent trading emails with a woman named Anna. She was the liaison between me and the publishing company’s editing team.

We’d often correspond while I was sitting in a chair at a local elementary school. It was there that I was supposed to be looking after one of the kids, but I’d usually just let this kid roll around on the carpet until he started wiping his runny nose with his hand and and then touch my arm.

The kid’s name was Robert, but he was too much of a dick, so I simply called him Bobby.

I have this unique ability to give someone a nickname, and then it sticks. I don’t know why this is, but my best theory is that it happens because the nicknames I dole out come from a place of care and affection.

Unfortunately, with Bobby, it was hard to tell where the love lied.

“Bobby, can’t you go do your math or something?” I’d ask him when he placed his boogers on my pants.

“Bobby, you’re seven years old. You can’t talk like that.”

“Fuck you, Mr. Q. You can’t tell me what to do,” he always told me, and this is why I never want to have kids.

Five minutes later Bobby and I always made up with a hug. That was our relationship.

Sometimes Bobby’s learned profanity was welcomed, specifically mornings after I got done bartending. Those days were rough because after mopping floors and cleaning the Rum Chata out of highball glasses, I didn’t get home until 3 A.M. I then had to be at the school by 7:30 A.M. to see that Bobby got off the short bus without punching some poor girl in the face.

“No, dude. We play that every day,” I would groan.

Three months of these squalid interactions took place before Bobby, and the editing process were finally out of my life.

Some of the editing was fun. I remember sitting in a studio apartment in Boston and going through a whole edit in eight hours. My eyes were so fried that I needed to walk to the local CVS just to exercise my brain.

Other times weren’t so fun, like telling Anna, “I don’t care if it’s grammatically correct to write god with a capital G. I want it to be lower-case.”

About seven weeks before the book was supposed to come out, I hopped on a bike with my best friend and began riding across America. It was somewhere in Wisconsin that I got the first peek at what the cover would look like.

It had two adults wearing shorts and t-shirts on the front underneath a glowing sun.

“Anna, just a reminder, we were riding our bikes in the winter,” I wrote.

“Sorry about that, Quentin. I’ll get that over to the art department right away.”

Fortunately, not long after, a better cover was sent to my inbox. 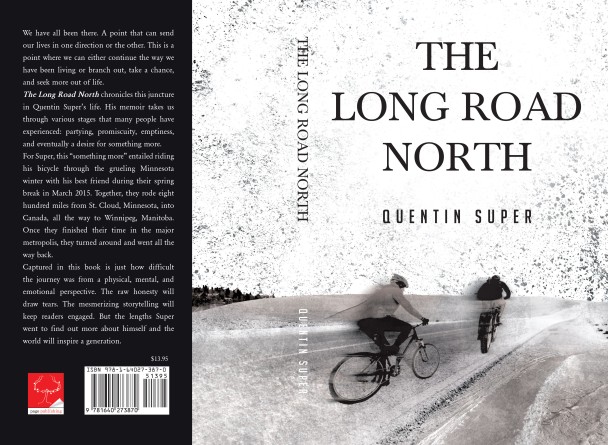 And then June 13, 2017 came. My buddy and I were hanging out in an office building in Portsmouth, New Hampshire. We had just spent the previous night sleeping on a wooden floor. It’s nights like those that have allowed me to now live life sleeping on stained carpets and air mattresses.

Anyway, one of the employees at this office took an interest in the fact that my book was coming out.

“There,” he said, pointing at his monitor sitting on his desk. I noticed he had Amazon’s website opened. “I just put your book in my cart.”

My eyes became fuzzy and a rush came over me. “I think you’re my first customer,” I nervously laughed.

I had written a few articles for a magazine, but other than that, I had never had anything published. I was so excited to have my own book forever cemented in italics.

When I returned home to Minnesota not long after that, it was time to start promoting The Long Road North.

She came outside and made me look pretty:

A month passed and the reality that my book would be a commercial failure was soon playing out. But that didn’t detract from all the good, like connecting with new people and receiving such gracious and positive feedback from people all over the world.

The next step was to go on a book tour. I had watched a lot of YouTube videos about rappers going on tour, and I imagined that I too would get to experience that feeling, albeit on a much smaller scale and sans the groupies.

So I sent out emails to a combined 300 bookstores, schools, and news stations. I wanted recognition, and was willing to ask anyone and everyone who could possibly help in that pursuit.

Only four people said yes. A couple Barnes & Nobles, a small bookstore in Minneapolis, and my old high school. Not exactly my rise to superstardom, but a start nonetheless.

A few days before the first event, I begin having trouble sleeping. Feelings of anxiety, fear, happiness, and excitement all joined forces to wreak havoc on my intestines and REM cycle.

Part of me wished all the stores would cancel, tell me they can no longer host me and that they hoped better luck would find me in the future.

That would relieve the terror that encompassed all my thoughts.

But the other part of me told me this was my time. All the hours I had devoted to not only riding a bike, but also to writing the subsequent story were going to begin paying off, for better or worse.

One September day, with the tour beginning that same night, I hopped in my grey Nissan and drove to whatever awaited me next.

This is what happened over the next few weeks:

It was then all over, gone in a flash. What once felt like a painstakingly long and tedious process had now been left to memory.

I had to kill the next few months before my work visa from China arrived. Slowly sales of the book dwindled and I had a couple thousand dollars in credit card debt that needed to be paid off, so I went back to bartending and scrolling through Tinder on my air mattress.

To say I learned a lot would be an understatement, and trying to detail everything I learned would take a novella to capture.

But I will say this:

1. Be relentless in what you want to do. Don’t let anyone say you’re not good enough.
2. What lies on the other side of fear is greatness.
3. Devise a good response for what your book is about, because everyone will ask.
4. You don’t make money off the book. You make money from parlaying the book into ancillary opportunities
5. Love yourself. Whether your book is a best-seller or sits idly underneath someone’s stack of to-do lists, you accomplished something. That alone is worth a pat on the back.

As I sit here now, three years later, I’m ready to do it all over again. Even this time, there are no promises that glory will follow with this next book. I’m still a relatively unknown. My blog still doesn’t generate enough passive income, and my Instagram still isn’t filled with models.

Forget the expression, “leaving your mark.” I haven’t even bought the pen yet.

I miss Bobby, and I miss editing.

I can’t wait for this next journey.

2 thoughts on “What It’s Like to Publish a Book”