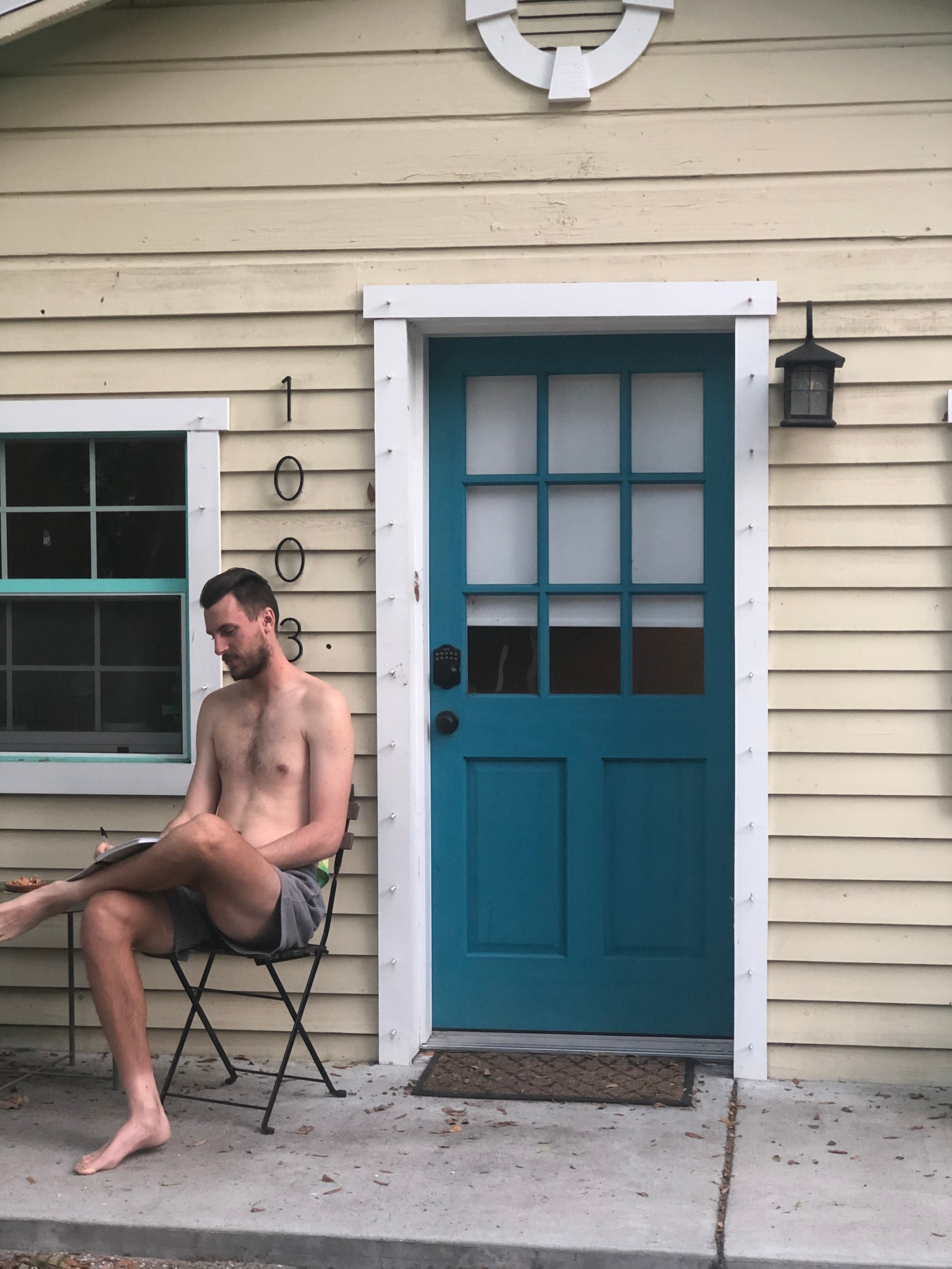 It’s been two weeks since the government told us to stay inside. Their request didn’t change my lifestyle much. The only difference is I haven’t been able to go to the gym to try and achieve a level of vanity I foolishly believe will make me happier.

This has relegated me to doing only pushups, then looking in the mirror and seeing my slight outline of ab muscles slowly deteriorate into nothingness.

Looking out the window, the small neighborhood in Tampa where I spend all day trying to get better doesn’t have much to offer the eyes. I live inside a shack that’s far nicer on the inside than on the outside.

Being unable to leave brings about reminiscing on the past, one that is mired in failure and disappointment. Seeing reports of China on my phone makes me think back to my time there. Beyond the obvious it was fun and I made memories that will last a lifetime, it certainly was a place that showed how selfish I had become.

It’s difficult to reflect on my relationships from that time. Save for a few individuals, I didn’t make any friends, instead subconsciously choosing to burn bridges with people who likely interacted with me with the best of intentions.

I had a number of chances at happiness over there, opportunities to settle down and begin to build a life beyond just myself. But I never took them, opting to serve my needs before anyone else’s.

Social media is just the worst, but pitifully I find myself scrolling through the timelines of people I’ve hurt, looking to see that they’re okay, but not too okay because then I feel worse about myself.

But feeling poorly is what I deserve. No matter how good my intentions were, the results came nowhere close to adequate.

Most of my friendships and relationships fizzle out, even the good ones. The ones I truly cherish remain, but they’ve evolved in such a way that the initial magic will never be the same.

And I can’t seem to forgive myself for the broken hearts, for the way some women would look me in the eyes, and I could see that their heart was breaking, that I wasn’t giving them what they wanted.

It used to be easy to brush those feelings off and move on, but now a burden has replaced those feelings of neutrality. I want to go back and say I’m sorry, that this was never my intention, but I’ve tried that, and it doesn’t work.

As they say, hell hath no fury.

It seems crazy to have lived somewhere for a year, but because of the way things played out, it’s like I never lived there at all. Nothing about Beijing calls me back, except the occasional hotpot recipe. I often sit and stare out the window, missing a place I once called home.

What hurts now though, is I’m not sure that place misses me.

I made a decision to forgo returning, consequently shunning the people who were waiting. In that sense, I forgot about them, and now they too have forgotten about me.

My only exit each day from the confines of this small home is a short walk to the grocery store. To get there I have to pass through poverty, desperation, and an array of other calamities that are a reminder of how fortunate my life has been. Many of these people will never know a universe outside the one they presently occupy.

That’s not necessarily a bad thing. Their perceptions are much different than mine. I can’t thrust my view of their lives onto them. We don’t see the world the same way. But yet I do, because to do otherwise seems inhumane. It’s in this thought process where pity is ultimately formed.

As men in tank tops walk the medians of busy roads, sodas in their hands that are covered by plastic gloves, their struggle feels more tangible. Perhaps by proxy, I’m judged in the same way they are by the rush of drivers waiting for the light to turn green. I don’t have a car. I ride the bus with the same aspirations as those walking next to me, hopeful my dreams will someday come true.

But my dreams are selfish. I fantasize only about living like Dan Bilzerian, being flush with money, temptation, and opportunity. No matter how my life plays out, I’ll always have problems, but I’d rather have the problems of a rich man than a poor man.

Fulfilling my life with endless debauchery won’t make me any happier. The last few years have taught me that. If anything, reaching that apex will likely make me plunge further into despair. If you’ve ever seen Citizen Kane, the 1941 Orson Welles film, you’ll know what I mean.

That guy has a hole in his heart not even a palatial kingdom can fill.

But strangely, and perhaps sadistically, it’s easy to romanticize his narrative. I’m not entirely sure I want to be conventionally happy, mostly because every time it seems I’ve reached that point, either my choices or circumstances do something to make that joy disappear. It’s crazy how much our insecurities drive us.

Which brings me back to the present. I live in this deteriorated part of the world because it’s where my bank account dictates I should be. The comforts of suburbia or an upscale apartment complex in the heart of the city is not what I deserve.

But then we get into the conversation about who deserves what. From birth we as a species aren’t given a fair shake. Some of us are born absurdly wealthy and others arrive into universes where circumstances could not be more dire.

Any success from then on is a direct result of our initial circumstances. A fair shake was never part of the agreement when we were given life into a world we didn’t choose to enter. Meritocracy then only holds so much value when we judge others for their present position.

Life isn’t fair. No matter how we try to dissect it, some of us are gifted talents that will automatically push us further than the rest.

I imagine we all think we deserve the world. I know I do. Many days I sit on the couch and wonder why my time hasn’t come yet, altogether forgetting that nothing is given.

The market isn’t that cruel. If my writing was world-class, compensation and success would find me. The hard part is showing the market that I have a gift and they should want me. This involves knocking on enough of the right doors so that when an opportunity presents itself, I’m there to seize it.

As mentioned earlier, dark times are upon us. ‘Rona season is another reminder that the poor are struggling and the rich are doing just fine. Consider that the wealthy person won’t miss a beat during this stretch, and the struggling individual will fall further into a hole of discontent and alienation.

The stimulus bill coming down the pipeline is nice, but in reality, it does little to aid the unsuccessful. A check to the tune of $1,200 merely pays a few bills. It doesn’t offer any sort of salvation or the ability to upwardly mobilize once this catastrophe has run its course.

In that sense, I don’t know what we do. Personally I find it futile to wait on others to bring happiness. My problems are mine to be fixed, not thrust onto someone else, so waiting on the government to make life better is foolhardy.

What I really want is for people to understand their true power, their abilities as individuals to change their life for the better. Finding happiness won’t just happen. It will instead be a result of the many decisions they have made that will set a new precedent.

Like I wrote about last week, stand for something. Make your life meaningful to you, even if that means alienating those around you. True happiness is in many ways unattainable, mostly because the word itself is a bit misleading.

Happiness isn’t a place. It’s a state of mind, and like many other emotions, it’s fluid and able to change instantly.

The challenge with happiness is once you’ve found it, you have to stay there, fighting off insecurities and self-doubt to realize things are never as bad as they seem, and altogether accepting that striving for an ideal happiness is okay.

No matter your position in life, you’ll always fall short of where you want to be. That doesn’t make you a failure. It makes you human.

Better days are coming, for our time in the spotlight, for the chance to prove to everyone else that what they don’t see in us we see in ourselves.

Each person’s ideal is being broadcast. Hopefully there are some antennas that pick it up.

And so we wait.