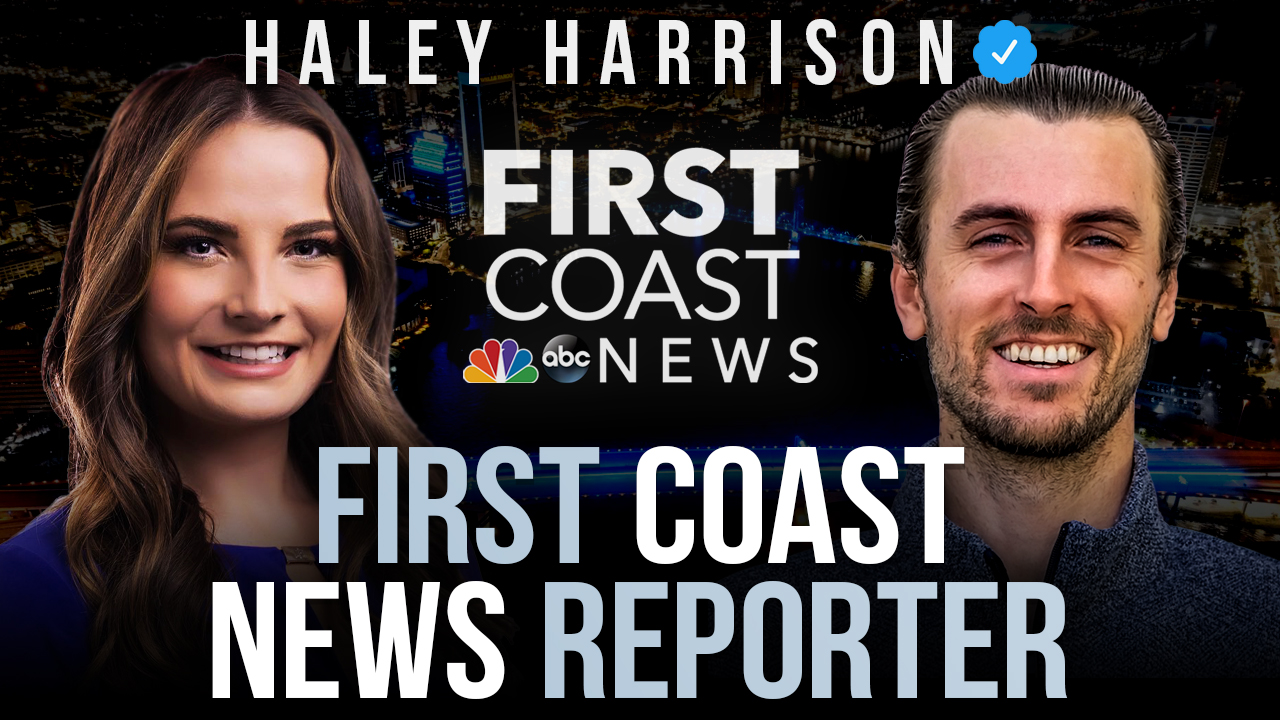 A former volleyball player at the University of North Florida, Harrison first began to develop an affinity for journalism during college, an interest that eventually took precedence over her athletic commitments, especially as the rigors of being a Division-I volleyball player began to sap her love for the sport.

“I got burnt out with volleyball and started focusing on journalism school and what was next after college, even though I actually had no interest in becoming a journalist when I was growing up,” Harrison says.

In fact, it wasn’t until Harrison connected with a family friend by the name of Brett Shipp, a former reporter for ABC affiliate WFAA in Dallas, that her interest in journalism initially sparked.

“Brett had me come out and shadow him, and after our first day I knew that investigative journalism was exactly what I wanted to do,” she says.

Harrison eventually left the University of North Florida and went back to Texas to be closer to family, but her budding passion for journalism followed her across state lines.

She soon enrolled in Texas Christian University’s acclaimed journalism school, a decision she says served as a catalyst for her career.

“Journalism school is key in getting your first job after school,” Harrison notes.

“The professors at my school were great. They put together a PowerPoint presentation outlining the type of work we could expect to get once we graduated. They also emphasized how we would have to start in a small market and work our way up.”

Unlike many vocations, getting hired as a journalist isn’t as simple as going online and applying for a position with a news station or media company.

Instead, aspiring journalists put together a reel of their previous work that they then pitch to prospective networks.

Moreover, even if they get hired, new journalists often work for low pay, the hope being that they will one day be able to ascend into more prominent roles with bigger companies.

“With journalism, perhaps more so than in any other career field, you have to make a lot of sacrifices and work your way up to where you want to be,” Harrison acknowledges.

Now nearly four years into her career, Harrison is still working diligently to refine her craft, putting in the requisite number of hours needed to become a better reporter.

But doing so also comes with a price, especially in Jacksonville, a city that has been deemed the murder capital of Florida, according to 2020 data compiled by the Florida Department of Law Enforcement.

“There are a lot of hard parts to my job,” Harrison says.

“Some of the stories I have to tell can be very difficult, and unfortunately you can become numb to some things.”

In that sense, it is not uncommon for Harrison to find herself interviewing the families of shooting victims, a component of her job that understandably causes negative emotions to manifest.

“At that point you realize how much pain those families are going through,” Harrison reveals.

“Conducting emotional interviews and covering mass shootings has had an impact on me personally, but it is still important to push through, put the story together, and get on-air.”

Although Harrison has been thrust into several precarious positions, she mentions that her producers aren’t clamoring for her to push an agenda, which in turn gives her the ability to take an objective approach that many people believe has been abandoned in modern journalism.

“When people ask themselves if they trust the media, unfortunately they tie that to the national media, and to be fair, we have seen how that can ruin things, but with local media, that’s its own thing,” Harrison explains, adding that during her investigative process she makes a concerted effort to gather details from both sides so that each perspective is considered.

“I don’t personally struggle with objective journalism, and that does lead me to believe that the concept itself is still attainable, so long as reporters recognize the importance of being unbiased.”

Therefore, it will be interesting to see how Harrison implements impartiality as she moves forward in her profession.

With her current contract set to expire later this year, Harrison remains undecided on the next phase of her career, but all signs point toward her eventually climbing the proverbial corporate ladder and landing a gig that would showcase her talents to a larger audience.

“I’m not exactly sure what the next step is. I have gotten some interest from bigger markets, so going that route is always a possibility,” she says.

“But right now, I’m focused on taking my career day by day and trying to become a better journalist because as is the case with any career, if you’re not constantly learning and trying to improve, you’re never going to get where you want to be.”

No matter where she ends up, this much is clear:

Harrison’s priority will always be about delivering the unvarnished truth.

“First and foremost, our duty as journalists is to inform the public,” she says.

“Specifically with investigative journalism, that can be something like exposing corruption, or parsing down a 100-page document into a story that is more digestible for the viewer, but there also is the reality that not every story that’s run is intended to be informational.”

Harrison then harkens back to a story she covered earlier this year that highlighted how a Jacksonville pastor connected with a pastor in India in order to raise enough funds to construct an ICU unit to care for patients who were afflicted during India’s deadly second wave of the COVID-19 virus.

“That story is not necessarily going to inform everyone, but it is going to teach a lesson,” Harrison says, while also mentioning that all stories are salient, not just those that generate controversy.

“Whether it is a story about someone who is passionate about what they do, or someone who is grieving following a tragic event, I think both are important.”

Future journalists would be wise to emulate Harrison’s attitudes, not only in terms of ideology, but also methodology, particularly because there are a few misconceptions about journalism that she would like to address.

“People think there is a lot of on-air time and that the job is all about being good on camera, but that is far from the truth,” Harrison begins.

“Much of the job is actually centered around writing and editing, source building, and creating relationships within the community.”

For those who aren’t discouraged by that type of behind-the-scenes work, Harrison then recommends that upcoming journalists meticulously study their predecessors and take a proactive approach to their future.

“Watch the news. I know that’s not always the most fun thing to do, but tune in and see if you like what the people on TV are doing,” she advises.

“Also, reach out to a local journalist and see if you can shadow them. Maybe that will inspire you in the same way that I was inspired.” QS