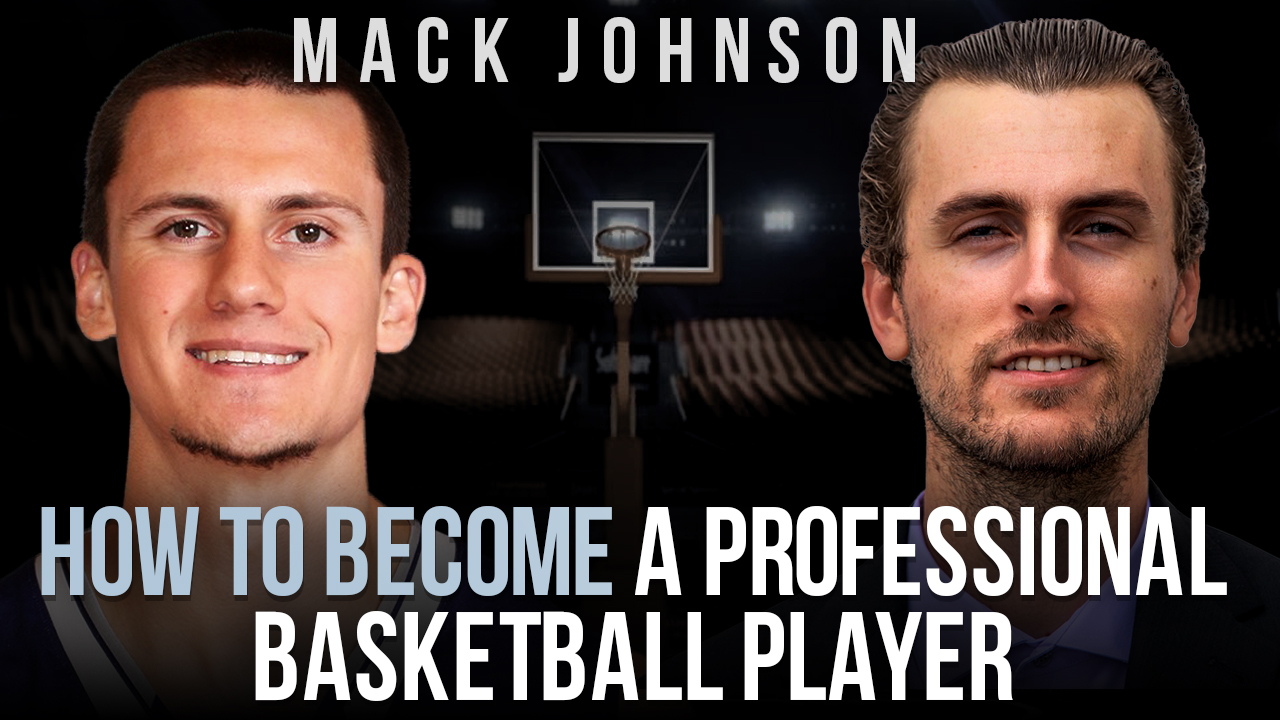 Mack Johnson is a professional basketball player from Roseville, Minnesota.

He graduated from Roseville High School in 2013 as the school’s all-time leader in scoring, and during his senior year he was also an academic all-state selection.

“I’m a Roseville guy through and through,” says Johnson, who credits much of his success with the Raiders to his former teammates and the coaching staff.

Following his standout career at Roseville, Johnson signed a letter of intent with the University of Sioux Falls, a D-II school located in the biggest city in South Dakota.

Johnson chose the Cougars because, despite his impressive high school pedigree, there weren’t many schools who were recruiting the 6-3 guard.

In fact, it wasn’t until Johnson’s senior year of high school that he began to field interest from various universities.

“Growing up, I was never flashy or overly athletic, but I always had fundamentals and could shoot the ball really well,” Johnson says.

It was this impeccable marksmanship that Johnson routinely displayed that ingratiated him to the coaches at USF, but as Johnson began to physically mature, he also saw an uptick in his athletic abilities.

Naturally, Johnson’s performance quickly earned him playing time, but he is also quick to point out that his career with the Cougars was not without its pitfalls.

“College was definitely a good experience, but there were ups and downs,” says Johnson.

“Coming out of high school, everyone thinks that they are the man, and so when I first got to Sioux Falls it was definitely a humbling experience.”

As the 2013-14 campaign unfolded, Johnson proved to be a reliable player, but it wasn’t as if he had already fully grasped who he was as a basketball player.

“There were still a lot of things that I needed to work on,” he says. “And then going against other schools in our conference who were also in the top-25 meant that every week we were playing a nationally-ranked team.”

These early tilts against stiff competition prepared Johnson for the grueling road ahead, which would later give him an advantage over other first-year players who either redshirted or were relegated to mop-duty during their freshman seasons.

“My freshman year I had worked into the starting rotation and that helped me because I was able to get a ton of experience. I was lucky because I got to learn from playing, as opposed to sitting on the bench and watching,” Johnson notes.

Going into his sophomore season, much would be asked of Johnson since the Cougars had lost a handful of seniors to graduation.

“Everyone was looking to me for scoring and leadership. Unfortunately, our record was not good. We only put up 62 points per game. For context, teams nowadays are putting up 80-90 points easily,” he explains.

While the team as a whole struggled to put up big numbers, Johnson capitalized on his increased role and averaged 15.1 points, but the extra minutes he logged also took their toll, resulting in Johnson undergoing offseason surgery that limited the way he could work out that summer.

Still, when the 2015-16 season began, Johnson flourished, ultimately finishing the season with an average of 17.5 points per game and earning a spot on the NSIC first-team.

Johnson appeared primed to head into his final season with momentum on his side, but an early back injury, coupled with a nagging ankle ailment, completely derailed his senior campaign.

This setback understandably had an effect on Johnson’s confidence, but through everything, Johnson maintains that he is grateful for every second of his tenure in Sioux Falls.

“It’s crazy because when I think about my time in Sioux Falls, it is all a blur, but I wouldn’t trade it for anything,” he says.

Upon graduating with a degree in exercise science, Johnson had an array of options when it came to deciding what to do next with his life.

Of course, he could have used his degree and looked for gainful employment, but Johnson felt that there was still so much he was capable of accomplishing on the hardwood.

After consulting with several people close to him, Johnson then embarked on working toward becoming a professional basketball player.

Johnson insists that while his skills and feel for the game of basketball had not deteriorated during his tumultuous senior season, he still had to rehab his body and get back into playing shape.

“After my senior year I was training a lot because I knew I wanted to become a professional basketball player, but my body was just not in a good position,” Johnson says, adding that his recovery regimen dictated he could not partake in full-speed games.

“I didn’t even step foot on the court for an entire year,” Johnson reveals.

But eventually Johnson’s body healed, and with that he developed an understanding for just how engaged he had to be both as a basketball player and as a steward of his overall health and wellness.

“As a college player, you’re working hard and focused on what you need to do for your team, but then shifting to becoming a professional required me needing to constantly be locked in, not only physically, but emotionally as well,” he says.

As far as finding a team to play for, Johnson dabbled in playing with a local semi-pro team, but his big break didn’t come until he gambled on himself and booked a ticket to Spain to participate in a tryout camp with other aspiring professionals.

“I knew that if I got over there it would be a lot easier than trying to find an agent and searching for overseas opportunities from here in Minnesota,” Johnson says of the decision to go abroad.

True to form, Johnson showed out at the camp and soon after inked a deal with a club that landed him in Jerez, a city in southern Spain that boasts a population of over 200,000 people and draws tourists from all over the world due to their fantastic weather.

“I think it rained twice the entire time I was there,” Johnson recalls.

As one could surmise, Johnson cherished his time in Spain, remarking that it wasn’t just the chance to live out his dream as a professional basketball player that made him feel thankful.

“When you travel somewhere, you get to experience a little bit of the culture, but then when you live there, it is totally different,” Johnson says, then mentioning that simple tasks like finding a grocery store or navigating public transport sometimes left him in a state of disarray.

“I know a little bit of Spanish, but by no means was I walking the streets and effectively communicating with people,” he says with a laugh.

Considering that Johnson initially struggled to find local panaderías, one then can imagine the difficulty he first endured when trying to navigate screen-and-rolls with his Spanish brethren.

“Basketball coaches always harp on communication, and even in English it is hard to get five guys on a court in sync,” Johnson says.

“To then try to do that in a foreign language is tough, but I now like to think that I’m really good at charades because I certainly was using a lot of hand signals over there.”

Ultimately, Johnson overcame not only the language barrier, but also the stifling defenses put on by his opponents, posting gaudy numbers and finishing the season with an average of 20.2 points per game.

Yet, Johnson says his biggest victory occurred when his brother came to visit him after the season had ended.

“My brother had not taken a vacation in five or six years because he was working so much, so for him to take time off and come see me was probably the highlight of my time in Spain,” Johnson acknowledges.

These days, due to the ongoing fallout from the COVID-19 pandemic, Johnson has been limited in terms of finding another team to play for, but he still maintains that his tenure as a professional basketball player is far from over, and that he is diligently working on both his body and his game until another opportunity arises.

“At this point in my career, I have mastered the offseason and how to stay in shape,” he says.

“The goal now is simply to work as hard as I can and put myself in the best position that I can, and then I’m just going to let the rest play out as it will. I’m fine with accepting whatever happens because I know that if I do what I’m supposed to do, I’ll be satisfied with any outcome.”

Once his playing days eventually conclude, Johnson says he would like to be a personal trainer and help others refine their bodies and maximize their basketball potential.

So far, he has already done the necessary legwork to ensure that personal training can be a part of his future.

“Right now, I run my own personal training and basketball training business. That’s something that I’m trying to establish for when my playing days are over. I have already developed relationships with clients from three or four years ago, which is important because in this business word-of-mouth is key,” Johnson explains, then indicating that he would also like to open up his own training facility, which would allow him to give back to the next generation of hoopers.

Yet, even though Johnson is slowly beginning to construct his long-term foundation, he is adamant that returning to the court and further cementing his basketball legacy remains the primary objective.

“Basketball is too big right now. It means so much to me. I still have to chase that dream.” QS

Click here to learn more, then watch this one-minute video for even more information!