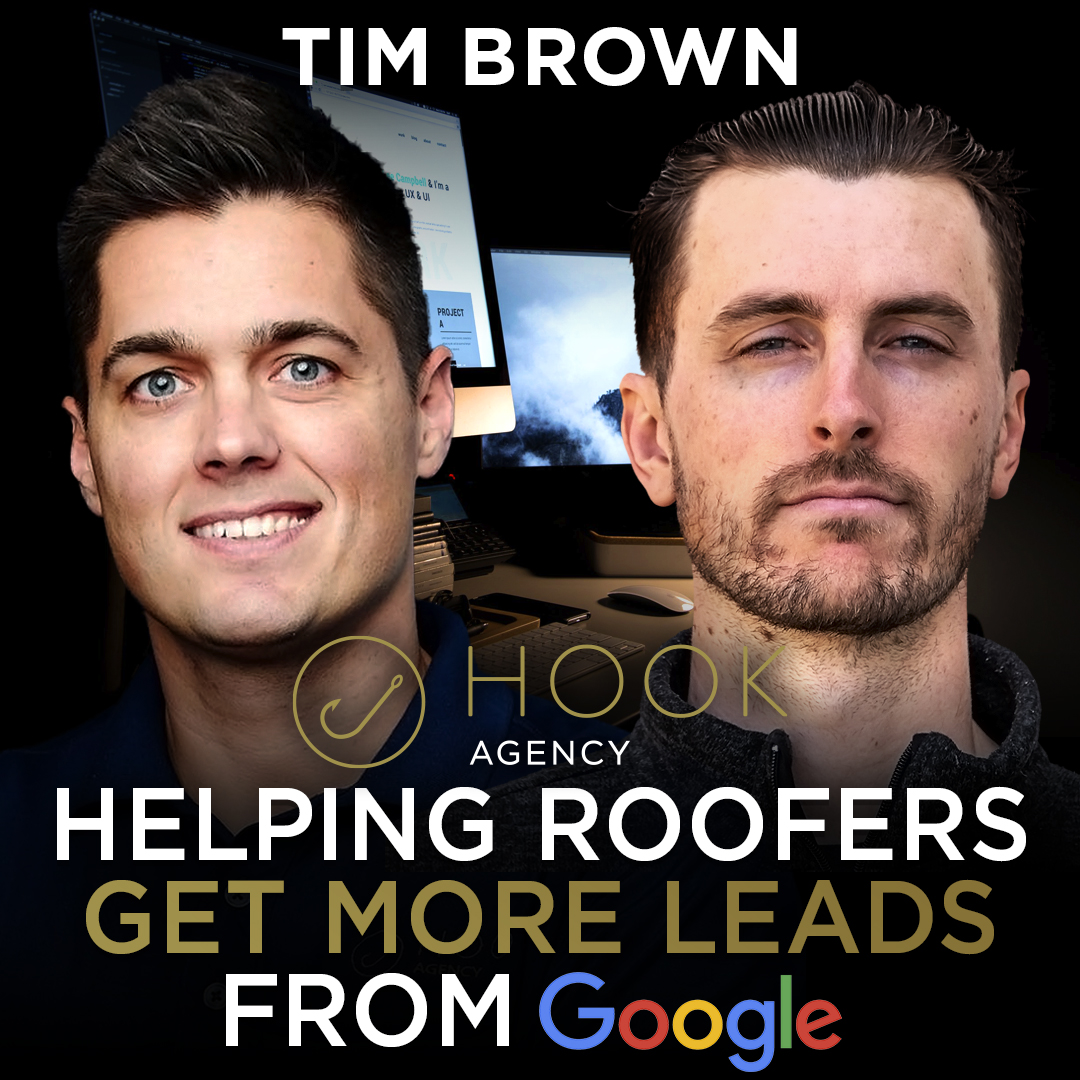 Tim Brown is the owner of Hook Agency, a marketing company in Minneapolis that helps roofing contractors get more leads from Google.

A native Minnesotan born in the quaint suburb of Corcoran, Brown grew up with three older brothers, and for the quartet it was nonstop adventure that consisted of playing sports, building forts, and evading the pesky ticks that make an appearance each spring.

“That, and there was a lot of interesting landscape in Corcoran,” Brown says, adding that he and his siblings would often go canoeing on abandoned cattle tracks that served as the site of several adrenaline-fueled forays.

When Brown wasn’t venturing into the woods or paddling down a river, like most millennials he could often be found behind a computer screen.

“I loved Photoshop when I was growing up. Being able to take images and mash them together, that was really fun,” Brown mentions.

Many teens were enamored with the creative freedom software like Photoshop afforded, but Brown’s fascination ran much deeper, to the point that when he was twelve years old he learned how to make a website on Homestead, a free website hosting platform that allowed him to refine his digital skills.

“I felt very powerful for a twelve-year-old,” Brown recalls. “I also felt like I had some natural talent in that area.”

After high school, Brown continued to hone his computer skills while at college, and even though it took him close to a decade to ultimately graduate, he left university possessing skills that enabled him to quickly enter the fast-growing job market of computer technology and marketing.

In the years since, Brown has learned invaluable lessons from influential associates who have shown him not only the inner workings of website design and SEO, but also how to effectively run a business.

Combined with his relentless hunger for knowledge and helping people, Brown later left his position as a marketing director for a firm in the Twin Cities and founded the aforementioned Hook Agency.

“I really wanted to have my own company,” Brown says of a decision that fulfilled his childhood dream of being in control of his own business.

Since its inception, Hook Agency has helped companies from different sectors generate momentum online, the goal being that attention garnered online will eventually translate into more sales for his clients.

“Hook Agency gets the word out,” Brown explains.

“We happen to do that for roofing contractors and home services businesses, and a lot of the principles that we operate by is why Hook Agency exists.”

Of course, every business, regardless of area or sector, wants to attract traffic to their website, but doing so is no easy task.

Brown notes that when Hook Agency first started, appeasing Google enough to land on the first page for website development companies was a challenge, but that after consistency and persistency, he and his team pushed through.

“That experience taught us how to get people to websites, so now we help roofing companies get visible on Google,” Brown says.

As for what Hook Agency specifically does to help roofing contractors ascend from the doldrums of Google’s basement (otherwise known as anything past the first page), Brown and his team create website content, implement coding techniques, and make technical changes to a roofer’s landing page.

Historically, that strategy has vastly improved the online presence of roofing companies in their local area, something Brown takes immense pride in, albeit humbly.

“We are not influencers, and we don’t expect our clients to be, but ultimately we are still able to get contractors traffic and leads from their website, without doing any crazy social media stuff,” Brown emphasizes, but that’s not to say that Hook Agency’s CEO avoids the trappings of Facebook and Instagram.

In fact, among roofing types, Brown is widely hailed as the “Meme God” on the internet, where every day he takes a moment to inject humor into an industry that otherwise has been riddled with controversy and divisiveness from some of its most popular figures.

In that sense, Brown is the antidote to the negativity circulating online in the roofing industry, but it’s not his flair for comedic effect that draws upward of one million unique visitors to Hook Agency’s website every year.

“At Hook Agency, we’re good at what we do, and it’s sort of a weird loophole how the Internet allows you to get traffic to your website just by making content. But that’s also very cool, and for that reason I’ve been exploiting that loophole ever since I learned about it,” Brown says.

In the last year, as his brand has grown and his face has become a staple at roofing events around the country, Brown decided to cease offering his services to clients outside the roofing industry.

Well, his goal was simple:

By specializing in the roofing industry, consequently he would be better able to serve that demographic of contractors.

“I like being good at marketing and Google, and the more you are specialized, the more positioned you are to become even better,” explains Brown, who believes that as a result of taking this approach, Hook Agency has become one of the premier SEO and marketing companies in the roofing industry.

“You want to keep finding your niche or your specialty until you can be the best at one thing. No one remembers the third best at something, so specializing can get you more attention, and what comes with more eyeballs is more business.”

That being said, Brown may just be taking one step backward so that he can eventually take two steps forward.

That’s because in the next five years, ideally Brown would expand his expertise into oft-forgotten trades like HVAC, plumbing, and commercial roofing, a triad of niches that Brown believes are lacking in the way of SEO optimization and marketing.

“We like specialty contractors because they always need leads, and plumbers and HVAC guys are a little underserved,” Brown says, but his ambitions extend far beyond simply making plumbing and HVAC companies relevant online.

“I want to help society see that trades are really cool because they’re necessary, high-paying, and good for the community, and I dream of a world where in ten years the positioning of trades in society is higher, and there is more respect given to that type of work.”

Ten years ago, Brown was a freshly minted college grad with ambitions that stretched beyond what conventional employers could offer him.

Fast forward to the present, where Brown is no longer the hopeful entrepreneur looking to leave his mark on the world, but in his place is the next wave of aspiring marketers.

Unfortunately, the new crop of marketing companies don’t have the pedigree or the technical skills to properly serve roofing contractors, a reality that Brown makes a concerted effort to alert roofers of, but he is also sympathetic, which is why he advises unestablished marketing companies to accept the burden of performance that too many seem content to disregard.

“As a marketing company, when a problem comes up, it doesn’t matter if you don’t need that customer. You should still look at the issue as an opportunity to grow personally and professionally,” says Brown, who credits former Navy SEAL and podcast guru Jocko Willink with instilling this type of belief.

“Trying to solve problems, as opposed to walking away from the situation, will make you better. In many ways I say that because the discomfort and anxiety that come with problems is what improves our services at Hook Agency.”

It’s that type of leadership that has Hook Agency primed to continue helping roofing contractors in the coming years, which is to say that prospective clients can expect this same level of commitment when they choose to partner with Brown and his team, even if they’re still not completely convinced of the need for marketing and SEO services.

“Not every one of our clients initially understands how difficult marketing is. To us, it is emotional labor, and a lot of times people don’t respect that, but we are doing work that matters because getting the word out about a roofing company’s services is an important problem to help solve.” QS