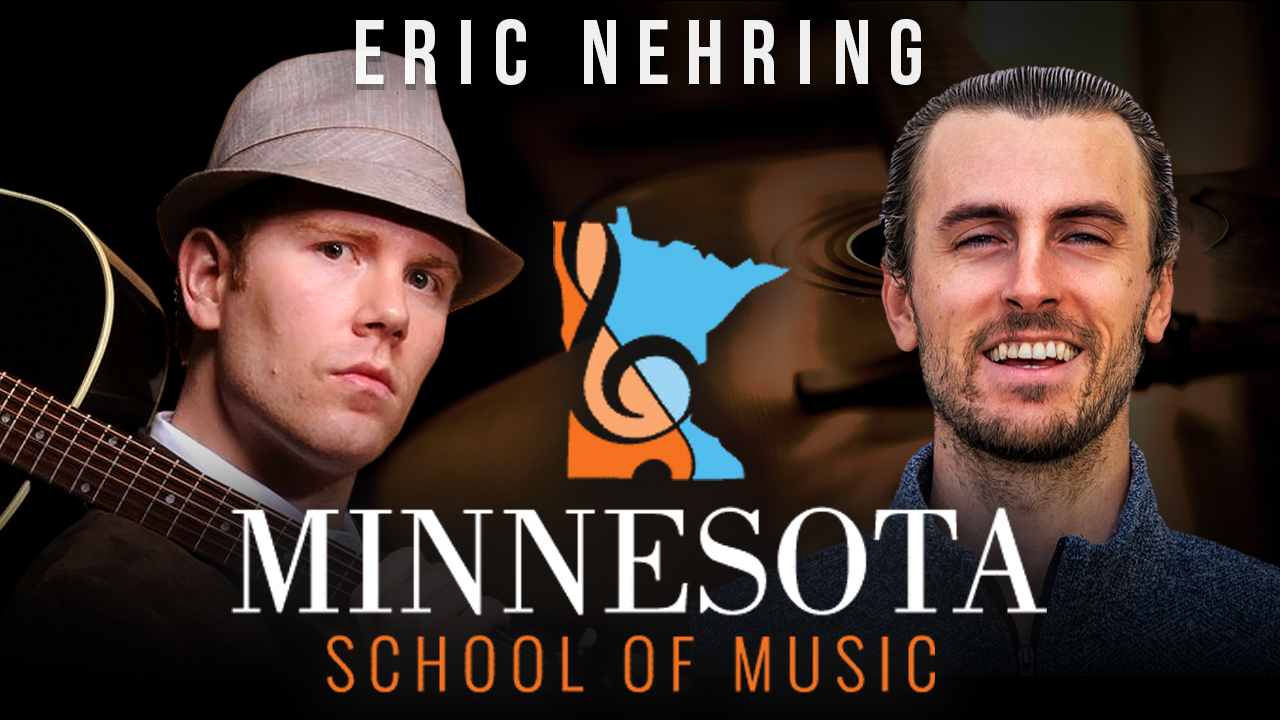 Eric Nehring is the owner of the Minnesota School of Music, a Twin-Cities based company that offers personalized music lessons for kids and teens.

Since childhood, music has always been a basic tenet of Nehring’s life, which includes a lengthy stretch where his mom worked crazy hours as a nurse, forcing Nehring to quickly learn how to take care of himself.

“I had my own key by the time I was in first grade, and every day for breakfast I would walk downstairs, go into the kitchen and check the cereal box to see if there were ants in it, because for some reason we always had ants in our cereal. It was rough,” Nehring recalls of his youth.

“There were no real luxuries in my home. I didn’t have a babysitter, so I spent a lot of time alone, and that continued into my high school years.”

The genesis of Nehring’s passion for music can be traced to many things, but the music savant also gives ample credit to his grandpa, a father-like presence who introduced Nehring to the guitar and the various melodies that the instrument could produce.

“I grew up driving from city to city with my grandfather, who was an over-the-road trucker,” Nehring says.

“When I wasn’t in school, I spent a lot of time with him on the road, and during that time the sound of the guitar became really powerful.”

Nehring also attributes much of his musical interests to his grandma, a devoutly religious woman who instilled the importance of family and community.

“She was heavily involved with her church and singing in the choir for around sixty years,” Nehring says.

A graduate of Centennial High School, Nehring is well-versed in teaching students how to play an eclectic array of instruments, yet his most refined skill is singing.

In fact, Nehring is so ardent about singing and performing that he admits his overall wellness would suffer if the microphone were to ever be permanently taken away from him.

“But if I lost my voice and couldn’t sing, I might as well go blind.”

Even though today Nehring owns and operates one of the most highly regarded music schools in the state of Minnesota, that deep-seated affinity for singing once drove Nehring to depart from the Midwest in order to pursue a career as a musician in California.

“When you are twenty-two years old, going to California sounds pretty cool,” he says.

Nehring’s pursuit eventually landed him and his bandmate Ben in the San Luis Obispo area, a majestic city located along the central coast of California.

“I loved it. It was the coolest place I had ever been,” Nehring says.

Like many ventures, Nehring experienced an epic honeymoon phase while in San Luis Obispo, but as time slowly trickled away, Nehring came to the same realization that so many other aspiring musicians have, in that making it in the entertainment industry is no easy endeavor.

Beyond the exorbitant rent prices and crippling everyday expenditures, Nehring also had to consider how all this was affecting his then-girlfriend (now his wife), who had followed him out west in support of his dreams, but with each passing day was also becoming more homesick.

Further complicating matters, albeit in a good way, Nehring was inundated with calls from a professor at St. Thomas University in Minneapolis who was urging him to come home and finish his higher education, a career choice that would present a much more stable path to financial success than late-night gigs in seedy dive bars.

“When we initially left for California, my mom was in tears. That was the first time I’ve ever seen her cry. My grandfather was also in tears. From an emotional perspective, that was tough,” Nehring says of the additional considerations that were indirectly beckoning him to return to the Twin Cities.

“I could have lived in California forever. I was in my element out there, but ultimately I realized that the central coast of California was a very expensive place to live and that there was more to this decision than just what I wanted.”

Therefore, after five tumultuous months in The Golden State, Nehring and his loyal girlfriend repacked their bags and returned to the frigidity afforded by Decembers in Minnesota.

“Going back was as tough as heading out there,” Nehring says. “I got back home right before Christmas, and to have to go from driving without traffic along the ocean to I-35W, salt trucks, and ice, it made me question what I was doing with my life.”

Being back in Minnesota may not have been as idyllic as life out west, but Nehring soon was enrolled at St. Thomas and honing his love for music in a way where he wasn’t constrained by outrageous financial obligations.

It was during this stint in university that Nehring also began to rediscover his initial appreciation for music, in a manner that transcended commercial possibilities.

In doing so, Nehring then started to foster an identity with the medium that allowed him to eventually share that same energy with his students at the Minnesota School of Music.

For Nehring, that ability to empower the next generation through music had, and still has, a glowingly positive and everlasting effect.

“I’m a fairly articulate guy, but I still don’t know what that thing is that calls to me,” Nehring says when asked to tap into the all-too-often indescribable force that many music enthusiasts revolve their life around.

“The people who are content with what they are doing are in music because they love it, not because of the money.”

That being said, not everyone involved in music will follow the same path as Nehring, a man who spent eleven years in higher education focusing on music before shifting into the role of an entrepreneur and opening the Minnesota School of Music.

“I was in college for so long that I eventually got a letter from the federal government telling me that I could no longer apply for financial aid,” Nehring recalls with a laugh.

More importantly, because of the hefty price tag attached to college tuition, Nehring goes as far as to advise future students not to pursue a music program in college.

“I’m going to touch some nerves with this, but I wouldn’t recommend that most musicians major in music,” Nehring says, citing the low ROI (return on investment) that comes with a degree in the fine arts.

“I know a lot of teachers who are six figures in debt, working four different jobs, burnt out, can’t make ends meet, and they are doing everything they possibly can.”

Coming from a successful entrepreneur who established a profitable brand in music after higher education, one could be forgiven for pointing out the irony in Nehring’s words, but not every person interested in music has the mental and emotional fortitude to overcome the countless obstacles levied by the unforgiving realties of entrepreneurism.

“As the owner of my own music school, even though music is our deliverable, that is only a fraction of what I do. It’s actually probably less than one percent of what I do,” Nehring explains, who also mentions that he no longer teaches because the Minnesota School of Music requires his attention in so many other places.

“The majority of my time is actually spent doing accounting and marketing, plus learning about management and legalese.”

Interestingly enough, Nehring credits his rocky and sometimes lonely childhood for his uncanny ability to be unwavering when dealing with the constant challenges that come with being a business owner.

“If you are going to be an entrepreneur, you better be self-reliant, especially because most of us don’t have a cheerleader in our corner,” Nehring stresses, noting that even loved ones have questioned his decisions because they weren’t able to share in his vision.

“I remember when I told my mom that I was going to stop teaching at the university in order to start a music school, and it was like a mic drop moment because it was dead silence.”

Nehring also acknowledges that he didn’t have a backup plan when he embarked on constructing the Minnesota School of Music, which perhaps is why the school ultimately developed into what it is today.

Still, despite the success of the Minnesota School of Music, Nehring is reluctant to endorse being an entrepreneur.

“Had I known how challenging running this business was going to be, I wouldn’t have done it. I would have gone into insurance sales or something,” Nehring says.

Fortunately for everyone associated with the Minnesota School of Music, Nehring endured, waking up at 5 A.M. every morning in order to devise a school that today boasts eighteen W-2 employees and 400 students.

“And they are all relying on me to produce,” Nehring says, meaning his work is far from over.

“Entrepreneurism is tough. You will be tested, and you will want to give up, but if you let those doubts linger for more than a few hours, you will get eaten alive because there’s too much competition, especially in music.”

Looking ahead, even though the Minnesota School of Music appears to be in a good place, Nehring insists that he is still plugging away in order to further expand the business.

“My goal right now is to create systems that will recruit, hire, and train the people who are already doing that exact same thing,” he says, adding that if his plan is successful, he will have built an organization that can help musically inclined students all across the Twin Cities.

To cater to that number of students, Nehring says he will need to have ten locations throughout the Twin Cities, a goal that will inevitably come with its own set of stress and challenges, but it also will allow Nehring to continue carrying out his own narrative.

“Fifteen years from now, when people ask where they should go study music, I don’t want them to have to think too long about it. They will want to go to the Minnesota School of Music because they recognize the brand and the value that we deliver,” he says.

“Beyond that, I want to create a legacy that will outlast my grandkids’ grandkids. Whatever impact I make now, I still want that to have a ripple effect 100 years from now.” QS