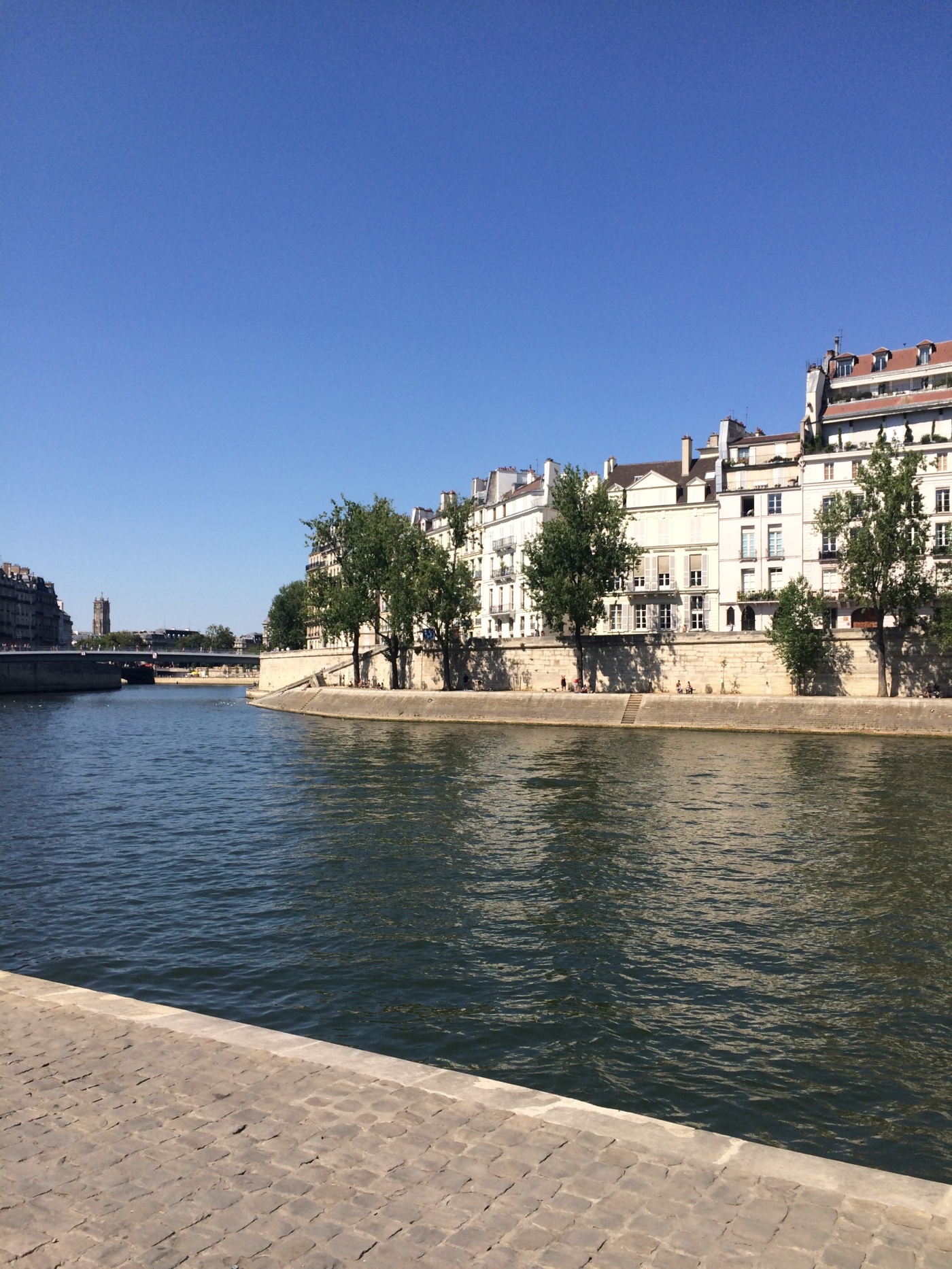 It’s 1 A.M when I get off the plane in Paris. A Canadian in London told me that the French hate Americans, so I walk sheepishly to the bus ticket line, prepared to get blasted based on the home of my origination.

“Where are you from?” the man with blonde hair asks.

I hesitate and think about lying. “Um,” I say, and the man is looking me dead in the eyes. Damn, this is so painful. “I’m from America, sir.”

“Which state?” he then asks.

“Do you know where Minnesota is?”

“Ah! Yes, Minnesota. Like the character Marshall in How I Met Your Mother.”

A smile creases on my face. “Exactly. Have you ever been there?”

“Painfully so,” I tell the man who has given me hope that this city won’t disregard my best intentions.

The next morning, I go to a writing workshop. These soirees are a treat, a chance to collaborate with like-minded people who see the world outside the parameters most people never care to explore.

I find myself in a park seated next to four other people. One is the mediator and group leader who carefully encourages everyone to be their most genuine self. One woman speaks mostly French, her English passable enough to survive outside of this majestic country, but not good enough to write with an artistic flair. Yet when she speaks, it’s a reminder why French is such a beautiful language. Her mouth enunciates each syllable and words stream out with the softness and care most women constitutionally possess.

The other two people are around my age. One is an attractive Jewish woman from Manhattan and the other is British. After the first exercise, I prove to be the most candid, the others writing with a political correctness usually reserved for the dinner table.

I really don’t care if any of these people like me. The Jewish woman is easy on the corneas, but she takes too much time to tell me she’s from New York, as if her place of residence is the only thing that matters.

I love New York. I think it’s an excellent place to make money and grow as a professional, yet there is an air of superiority when she talks, as if just being in a city of that size is worthy of my praise.

I can’t play that game. I am who I am: a kid from the suburbs of Minneapolis, Minnesota who likes to read the newspaper each morning and clack away on the computer in the afternoons. I watch too much YouTube and spend too much time analyzing communication patterns on Bumble and Tinder. Basically, I need to get my priorities documented and then enforced.

“We should get lunch after this,” the Jewish woman tells me while we walk to a café for the final literary exercise.

“Like, all of us?” I ask, the Brit clearly within earshot and eager to immerse himself in the pretty Jewish woman’s graces.

Her eyes suggest that a group outing was not her intention, and truthfully I’m playing games during this spat of repartee. I know what she really wants, but it feels so emotionally exhausting to try to cater to that, so I play off her advances. This makes her more pursuant to her cause, and I’m thankful I’ve matured enough to not be hamstrung by youthful desires.

“So, look,” I tell her after the workshop wraps up, “I am just going to go back. Been a long day.”

This doesn’t make her happy, but it empowers me. If only I had the foresight to realize how powerful it feels to walk away from a woman’s desires, my life might be radically different. But it’s not, so I punish myself on the walk home, ridicule circling my brain for not knowing what I do not know. Ignorance is sometimes bliss, and other times it’s a massive detriment.

Fast forward a few days. My flight to Reykjavik isn’t until 9:30. These days of trying to decide what to do with half a day are always a challenge. I could take a bike ride and try to squeeze in a nice lunch somewhere, then unjustifiably worry about missing a plane that, on account of my psychotic paranoia, I’ll end up being three hours early for anyway. Actually, I’m sick of being on a bike. This isn’t 2017, and I can’t ride until my legs shake from soreness.

I load up Google Maps and it says the walk from my apartment to the airport is twelve miles, which comes out to roughly six hours. I figure I’ll just make a day of it by eating my way through the outskirts of Paris.

At breakfast, I try to leave a boring vampire book I inexplicably bought on the table for some other poor soul to ingest and feel conflicted about.

“Excuse me, you forgot your book,” the waitress with dark hair calls to me just as I place my hand on the door.

“Oh, yeah, sorry about that,” I say with a reluctant smile.

A few miles later I leave the book on a bench. Someone might read it.

The further from the city center I go, the less glamorous Paris becomes. I suppose that’s only natural. The entire city can’t be an artistic masterpiece.

My stomach starts to rumble a little after lunchtime. I choose to exercise patience and be selective of where I stop because the people on this side of town look less inviting than they did back in the city center.

A homeless woman sits right in front of a mall. All I want to do is go upstairs and buy some long pants for Iceland. The woman stares into my eyes, perhaps curious if I’m French. A swift maneuver and I’m past the awkwardness of looking foolish trying to communicate in a language for which I know only four words.

It isn’t until I reach a fast-food restaurant in the middle of nowhere that I become convinced to stop. A man helps me order off an electric machine and then I devour a burger and fries before heading back out into the streets.

I’m never more introspective than when I’m alone, be it on a bike or a walk. These exercises offer the chance to get lost in my head while maintaining a semblance of physical activity. This is why I am able to spend hours hitting a golf ball between two trees in the backyard of my parent’s home. Monotony can be sexy if you know what you’re doing.

This walk through the unadvertised section of Paris is another reminder not to take life too seriously. One of the harder things at my age is dealing with people I care for opining about the state of my life.

Health insurance this, savings account that. The future will be here sooner than you think. All these topics make me want to vomit and crawl in a hole until the politicians quit trying to promote fear in America. Granted, I’m an ignorant bird who knows nothing of the way the bigger picture functions, but my life has always achieved harmony when I make it less about myself and more about others. It’s easier to build someone up than tear them down.

I hate negativity, or reminders that I’m not successful; not because the people telling me are wrong, but because it’s as if they only look at life as a problem to be solved. I’m sure there is a certain peace that comes with having one’s finances squared away and knowing that when they have annoying aches and pains they can go to the doctor’s office and not become bankrupt.

But life has to be about more than just survival, not in evolutionary terms, but in the sense that as humans we’ve been given the cognitive awareness to see life as more than a chance to pass our genes on. We can change the world.

I like being on the road because it offers a sense of freedom I can’t get driving to the same underpaid job every day. If I’m going to live near the poverty line, I might as well do it on my terms, instead of being confined to a one-bedroom while I compete for a job that might be good enough to land me a woman of my dreams.

Speaking of dreams, that’s all my imagined woman is at the moment. I would actually be embarrassed to meet a quality woman right now because all I could offer her is a dream and a personality she will likely tire of after a few months of the honeymoon phase vanishes.

Have you ever seen the movie Gone Girl? That narrative brings me to tears every time I pop the outdated disc into the DVD player. Ben Affleck’s character tires of his marriage and then cheats on his wife. She catches him at one point kissing his mistress in the same way he once kissed her. If your heart doesn’t break a little bit when you watch that scene, you’re either not paying attention or you have no soul.

Affleck’s wife then gets back at him by devising a plan that will send him to the electric chair. Spoiler alert: she doesn’t get away with it and the two end up back in the same home, in the same toxic marriage.

“All we do is manipulate and hate each other,” Affleck says in so many words when his wife reveals at the end that she’s pregnant, this on the heels of him slamming her head into the wall when apparently he just couldn’t take it anymore.

“That’s marriage,” she delicately yet emphatically replies, the implication being that they signed up for this level of hardship when they wrote and expressed their vows.

Obviously, Affleck’s character’s marriage sucks, but I’ve never met anyone who was completely satisfied in their own union. It’s as if there is always a cloud of unhappiness cast over two people who claim to unconditionally love each other. The divorce numbers in the United States are staggering, so much so that now my Bumble bio simply reads: “looking for my first wife,” which sounds awful, but statistically I have a 50% shot of making it through a first marriage. Even just writing that sounds awful.

To clarify: I’m not running away from responsibility by choosing to embark on a path of my own, and I’m not single because dating is rigged toward the wealthy and undeterred.

I’m simply not good enough right now; not a good enough writer for people to write me five-digit checks, and not mature or stable enough for a woman of high character and substance to let me into her life.

I’m a provisional failure, a work in progress who one day may be those things I just listed. But at the moment, the only thing I am, is good enough to walk independently on the path that for years I dreamt of paving.